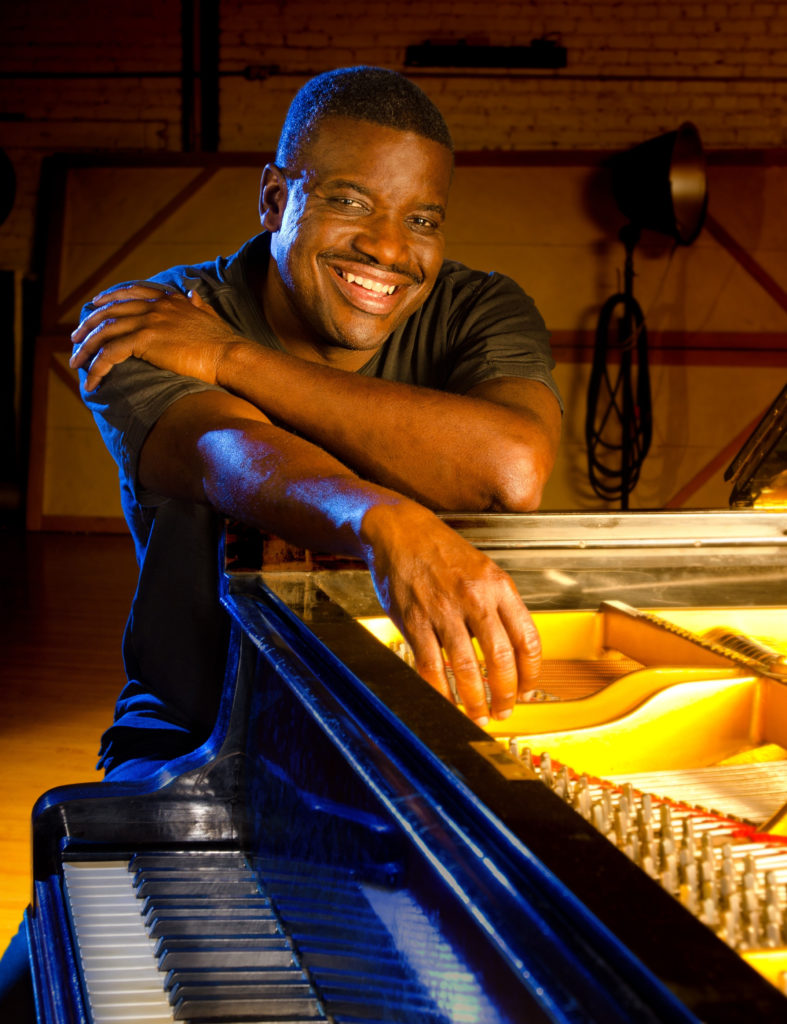 …This is What I Said…

The use of ellipses (…) before and after the title of Billy Townes’ latest album This is What I Said is highly intentional, reflecting a the many ongoing musical conversations the multi-talented composer and keyboardist is having these days.

Over the stylistically expansive array of ten tracks, the title refers to the intuitive dialogue he’s having with an incredible cast of longtime band members, incredible up and coming talent out of his longtime hometown of El Paso and the legendary L.A. based rhythm section of bassist Sekou Bunch and Rayford Griffin. Reflecting Townes’ track by track approach and desire to share the spotlight, there are over 30 total musicians on the album.

…This is What I Said…is also a 30th Anniversary celebration of sharing his innovative, funky and ever-evolving musical vibe (over the course of 16 albums) with fans – a generation spanning, give and take communication that began with the release of his 1988 debut Stratosphere. Finally, the collection is joyfully defiant statement of pride and purpose for the contemporary jazz veteran. Keeping things decidedly eclectic and old school like his piano and keyboard heroes George Duke, Joe Sample and Dave Grusin, Townes is making the music he wants to make, unapologetically and without concern about trends or tailoring his trademark style for airplay.

“The album reflects the funky contemporary jazz style I have always loved, but with a lot of interesting twists,” says Townes about his first full length recording since Alchemy in 2012. “I had thought about creating a second retrospective collection, but over the past few years I accumulated a lot of solid new material that I felt I should start recording. I shared a lot of the tracks with George Ware, my longtime engineer and co-producer who is a top beta tester for Pro Tools and Digidesign, and he put a wealth of classic synthesizer sounds at my disposal.

“While my trademark Yamaha CS 1 grand piano is front and center, and I also play a Rhodes electric piano, I also worked with a range of synth software, which allowed me to capture the classic contemporary jazz vibe I grew up with and played earlier in my career. I enjoyed paying homage to the legends that have inspired me. George did an incredible job doing the digital mix and mastering. Playing with 1,000 textures was fun, but to capture just the right groove, we used all live drums.”

Olivas, another mainstay in Townes’ core unit, shifts artfully between his jazz trumpet melody and a later dreamy flugelhorn flow. Young El Paso guitarist Shaun Mahoney showcases his wild promise on “Pathway to the Northern Summit” and especially his blazing solo on the raw, rockin’ bluesy and horn section fired closer “Ikky Sauce for Jawn.” Another longtime Townes cohort, singer Monica Gutierrez, is pure seduction with her soulful lead vocal on the balmy, tropical “Gentle Rain” and enhances the hook of “Early A.M. Attitude” with her wordless magic. Another track featuring the dynamic horn section is the buoyant jazz/funk explosion “K Groove,” which also spotlights trumpeter Chris Oliver and George Ware on electric guitar. The horn arrangements were created by Jawn Glass, who passed away suddenly and unexpectedly after contributing to this project.

Townes fans outside the now thriving jazz community of El Paso who’ve been wondering what the keyboardist has been up to since the release of Alchemy need only ask those who live there. Townes is busier than ever as a performer, hosting and performing every Thursday at Speaking Rock Entertainment Center and booking bands there. He’s also been active on the regional festival circuit, headlining at the Mecia Jazz Festival near Las Cruces, NM, the El Paso Jazz at Sunset Festival and others. In addition, Townes’ career as a music educator has allowed him to discover and cultivate incredible young talent. As a professor at El Paso Community College year round and at University of Texas El Paso each spring semester, he teaches electronic music recording and mass communication with a focus on audio production. Since 2002, he has also been a regular jazz clinician at Coronado High School, working with students in the school band.

Born in New York City, Townes’ earliest experiences with the piano came from his music teacher mother when he was still a toddler in Okinawa, Japan, where his father was stationed in the army. The family settled in El Paso, Texas in 1971, and soon after that, Townes began formal classical training on his primary instrument while also learning drums and, later, marching in his high school band. Townes’ initial exposure to jazz as a teenager transformed his life instantly.

Townes attended Embry-Riddle Aeronautical University in Arizona, where he took both business and piloting courses. Aside from playing throughout Arizona with such jazz notables as former Brubeck bassist Dick Brandt and drummer Mel Zelnick of Benny Goodman’s Orchestra, Townes also formed his own band, Modern Session, with bassist Jim Foster. They played summers in El Paso, and upon graduation, turned the group into a full time endeavor, performing at numerous clubs and in concerts and festivals throughout the Southwest. The group garnered a small but loyal following, and their budding success inspired them to record the original material that Townes had been working on over the previous few years. An EP of varied musical style and textures, Stratosphere became a popular “must have” recording by jazz aficionados in El Paso and led the keyboardist and Foster to work on a follow-up with their friend and longtime collaborator, Tony Mac.

Townes took his artistry to another level and became a nationally recognized jazz artist with Sun City at Night, his first recording with the current core Modern Session lineup, which along with Foster also included Demetrius Williams and Marty Olivas. His 1996 follow-up Nocturnal brought saxophonist Adrian Terrazas Gonzales into the mix and reflected Townes’ increasing fascination with recording technology, which took the recording to a heightened sonic level. Founding his own label Shade Records in 1997 marked a turning point in Townes’ career, as he blazed a trail that many independent pop and jazz artists would follow when digital downloading became the standard in the 2000s.

While Townes remained busy with his label and studio (BT Productions, a full-service recording facility), he continued to add to his discography with the similarly well-received album Embrace – his 1999 release which reflected a more organic and jazzy, live approach over electronic sampling and scored several hits on regional radio stations; Embrace became the keyboardist’s bestselling project within the first two months of its release. While the passings of his parents over the years shifted the emotional core of his artistic expression, he continued, after the well- received retrospective The Billy Townes Collection, to explore exciting new territories with each subsequent release – from Everyday Life in 2004 through Alchemy in 2012.

“At this point in my life and career, I am excited to continue to work with so many gifted young and veteran artists and create music for the many fans who have remained so loyal, while also touching new listeners along the way,” Townes says. “For those who want to hear what I have been up to musically, the title says it all – This is What I Said! I’m very happy with the compositions and production and think this is my most accomplished outing yet. No matter how many years I’ve been playing and recording, everyone wants to tell you what they want you to do – but with this album, I’m telling them, “This is what I am saying,” and I hope you like it.